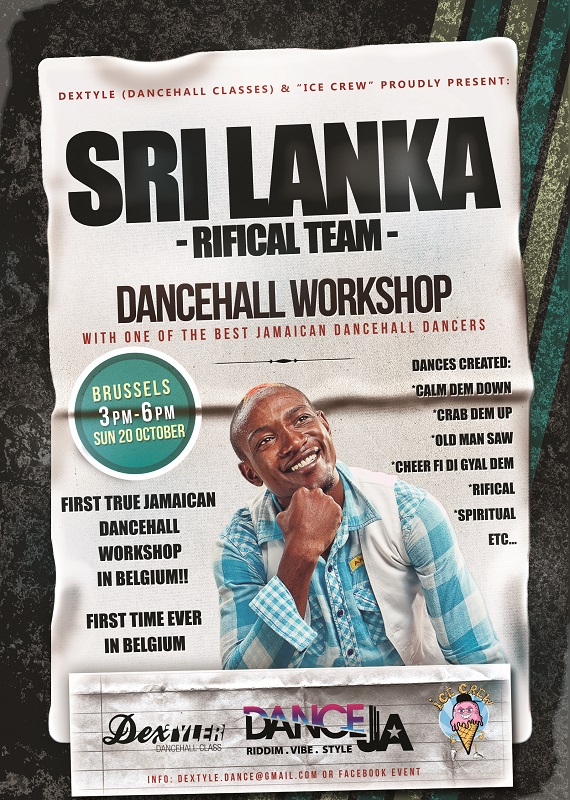 Sunday October, 20th 2013 – it’s the date that every single Dancehall dancer in Belgium should add to his/her agenda.
Straight from Jamaica, straight from the origins of the Dancehall and, moreover, straight from all the street parties in Kingston: a real Jamaican Dancehall Dancer!

Ladies and Gentlemen: SRI LANKA – Rifical Team for the first time in Belgium and the first Dancehall dancer from Jamaica in Belgium.

You want to miss this?!
All info on the facebook event.

Sri Lanka’s dance career started officially in March 2006, when he formed a male Dancehall Group called M.O.B (Men of Business) along with his dance colleagues Crazy Hype and Ringo Mob.

As a founding member of the group, Sri-Lanka played an important role as one of the creators for the many steps that enabled the group to become popular on the dancehall entertainment scene in Jamaica and around the world.

Some of the dance steps the group  created were:

In 2007 they were the winners of the JCDC Reggae World Dance Championship. They collected the Stone Love Award for the best New Dance Crew in 2008 and in 2011 for Best Choreography Group.

In 2010, the founders of MOB part ways, despite the separation the members were still identified as MOB and continued to use the name. Sri-Lanka formed his own dance group Rifical Team. As a solo dancer Sri-Lanka was nominated in DanceJa Awards as Male Dancer of the Year for 2011 and Dancehall Teacher of the Year for 2012. . He got his big break as a Dancehall Teacher representing DanceJa Team in 2012 when he travelled to St. Petersburg Russia for True Jamaican Camp (Cultural Exchange Dancehall Workshops and Seminars) along with 4 Jamaicans Andre Cosmic, John Bling Shelly and Latonya Style.

In Jamaica Sri-Lanka is highly respected and recognized as an Outstanding Dancehall Dancer. He is considered by many as one of the most popular, reliable, energetic, consistent and unique Street Dancers that has stepped out of his comfort zone and elevated to great undertakings. Sri-Lanka’s dream is to be able to sufficiently provide for his family and give back to his community by working hard as an entertainer, while representing his country as a cultural ambassador.

This site uses Akismet to reduce spam. Learn how your comment data is processed.